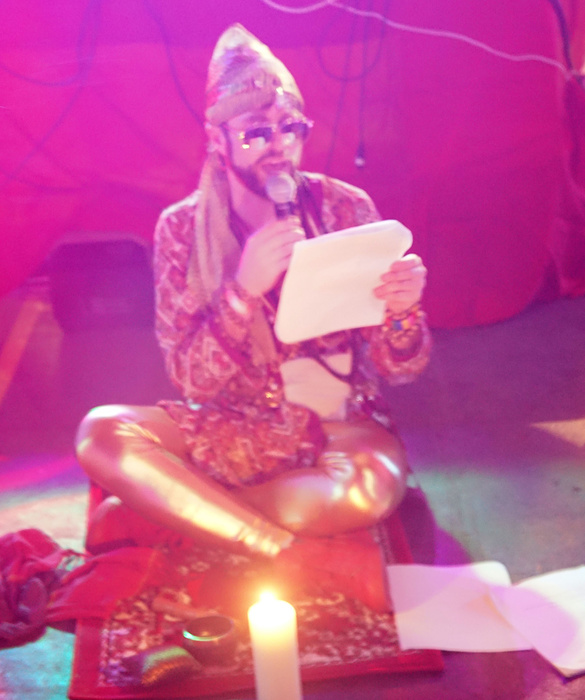 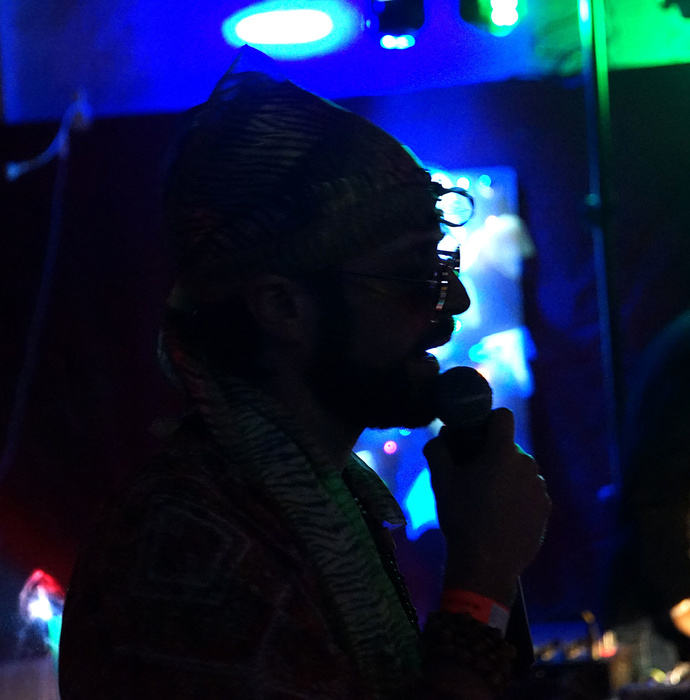 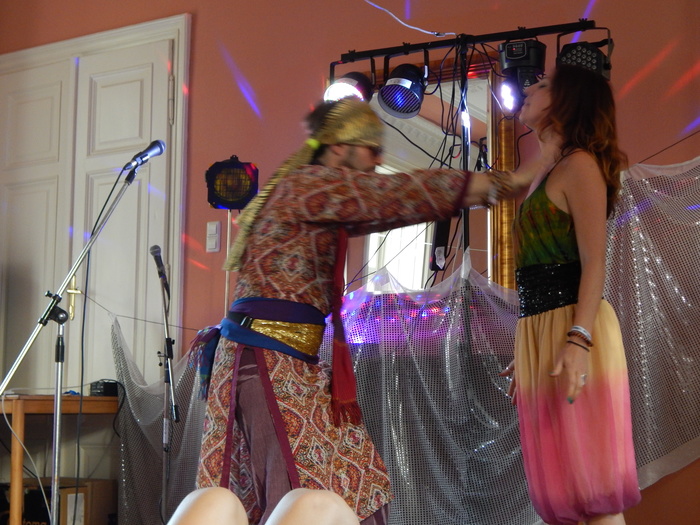 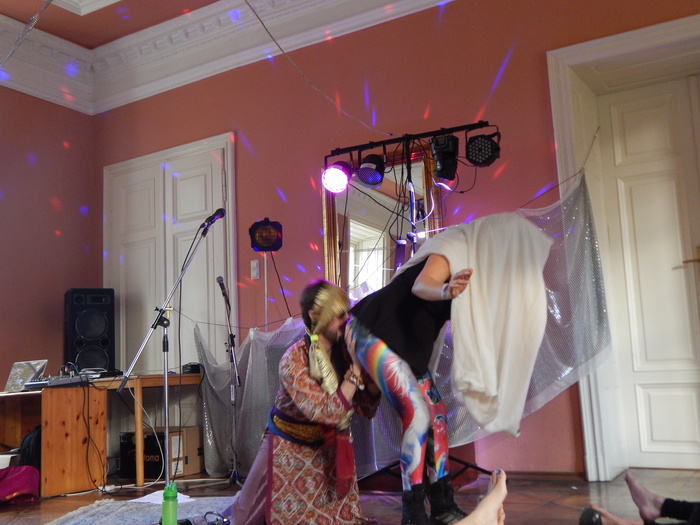 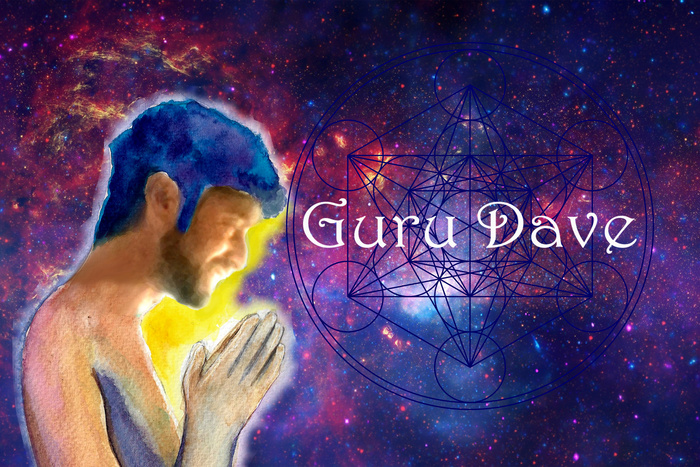 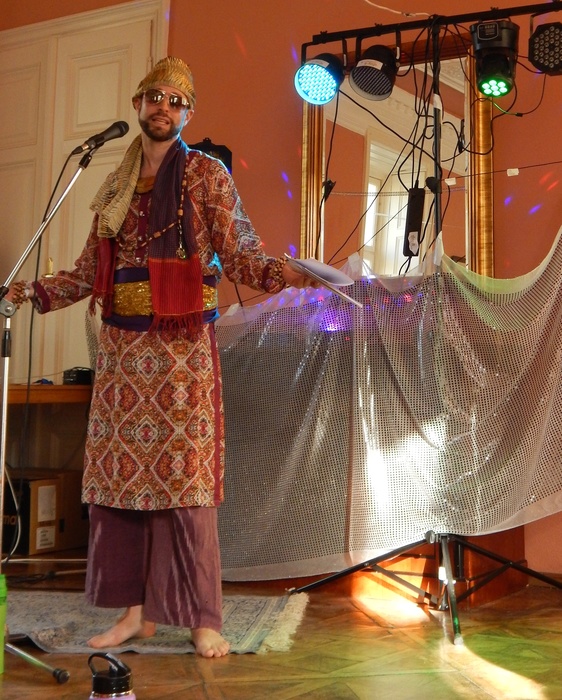 It's time for some spiritual healing for The Borderland. The Terrible Tantric Teacher to Tickle Your Tonsils. Guru Dave knows how to guide a meditation. He knows a bit of yoga too. But mostly he knows how to get laid. He’ll free you from your ego, so long

I have decided to personally fund the shortfall should we meet the newly reduced minimum.
16 grantlets: I will self fund the minimum.
38: actual minumum. the minimum will be kindly covered by BL.
55: full project with all bells and whistles.

Guru Dave's Trance and Mental Meditation is an interactive satirical comedy experience taking the form of a meditation class, yoga session, tantra workshop and occasional walkable healing. What starts as a sincere meditation descends to comedic destruction. At first audiences lie down for a genuine meditation. But as the meditations begins to celebrate Guru Dave a bit too much, and insult your own unenlightened lives, it becomes gradually clear that Guru Dave is an ego driven charlatan, bent on taking your money, and your girlfriend. The show starts with Guru Dave's followers chanting and singing and banging tambourines, drumming up an audience. They are cleansed and prepared to meet the Guru. That's when the fun really begins.

The Borderland has invited His Wonderfulness Guru Dave to perform a series of interactive meditations, healings, plant medicine ceremonies and intimate yogas, culminating in a massive group yoga and meditation for the entire Borderland together - or as many as can fit in his private chambers anyway. His wonderfulness has agreed to perform this multi-day extravaganza. Now a word from the divine being himself:

Greetings Disciples - it is I, his wonderfulness Guru Dave. I am sending you this communique through my immense vibrational power over the astral plains. Cleanse yourself and be ready for a purification, ritual, cleansing, healing, tantric, shamanic ceremony like no other. Who would have thought that Borderland could afford my huge fee, but somehow they have found a way to bring me, my rolls-royce and my entire entourage first class direct from Rishikesh or Goa or wherever gurus like me hang out.

With my disciples we will traverse the length and breadth of the Borderland, seeking out those who need our spiritual guidance, offering meditations, sacred plant rituals, heightened experiences, powerful visualisations, and any other over priced nonsense that we can come up with.

We will perform interventions in camps and cabins, forests and glades, lakes and temples, gathering a following, a lucky few who will receive the immense spiritual power of my special love in a grand and final ritual.

And for the most attractive of you all, private one on one tantra with Guru Dave. Form an orderly queue.

---------
Guru Dave’s Trance and Mental Intervention is a satire on the world of meditation, shamanism, yogi’s gurus, self declared spiritual teachers, and over priced, unregulated, new age nonsense. It is a wake up call, an invitation to be cynical, and to think twice before blindly trusting those who for a hefty fee would teach you to be free from the personal, psychological, emotional or sexual hangups that they probably carry far worse than you.

The performance is interactive, immersive and forms a procession. It builds on the success of The Sinners Sermon - a processional satire performed at Borderland 2015, and on The Trans And Mental Meditation, performed at the Nest, Nowhere, BBB and beyond.

The project already exists to some extent and is re-usable year on year. I improve it each year. Many of the props, costumes are already in my possession. The budget below constitutes only a part of the actual cost.

1) transporting the project from UK to Borderland - this would appear to be an outsized expense if you look at it as a ratio, because the total project costs are much larger than this application.
2) upgrades and improvements - the tunic, trinkets
3) consumables and replacement for damaged items - items that are used up in each performance such as incense, candles, rose water. And items that have got damaged or not been returned - such as laminates for the medallions, necklaces for the medallions etc. This constitutes a very small fraction of this application

Nadaav has been putting on satirical performance art with a punch since 2015. At his first borderland he brought The Sinners' Sermon, an immersive theatrical satirical comedy on morality, sexuality and authority. And lots of silly underwear. Since then he has written and performed shows at Nest, Nowhere, Burning Man and many other burns as well as theatres and venues in London. His work is loud, in your face and sometimes a little offensive. But it is usually trying to make an important point, with laughter along the way.

None expected - anything found/created by accident will be addressed.

I would love to invite borderlings to participate as followers of the Guru. This is a fun, co-created, interactive role. It involves some singing, chanting and the carrying incense. You can be as dramatic or quiet as you like in the role, there is space for all.