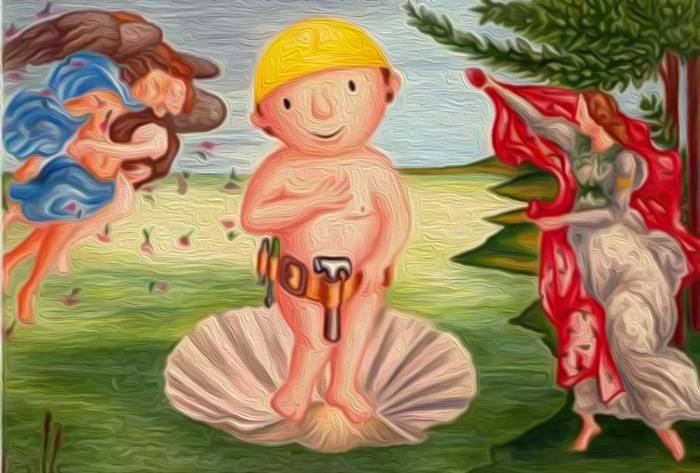 WCH is a meta camp (DPW equivalent) whose main function is to coordinate BL's infrastructure build (electricity, fire roads etc.) but also provide support to ambitious art projects that get stuck. We also do our own dream projects such as The Quest Hall.

Working Class Heroes or WCH is Borderland's equivalent to the Department of Public Works at Burning Man. We provide the tools, heavy machinery and skill sets necessary to enable the infrastructural framework of The Borderland as a whole. In other words things like electricity, heavy lifting, fire roads and historically also fire safety. We usually run a number of our own dream projects on the side and strive to operate from within a work is play-mindset. We cherish principles such as communal effort and participation but tend to lean towards the radically exclusive side when it comes to lazy motherfuckers.

A major new thing for 2019 is that we will build and launch a new addition to the BL departments called The Quest Hall (see separate dream) which is a sort of hybrid between a RPG-inspired tavern (think the shady jazz cantina from Star Wars where Han Solo is introduced) and a work distribution central where Borderlings can go to acquire quests (rewarded by XP and loot) supplied by the general BL community. Tasks (quests) will range from the very real and practical to the very dreamy and fictional in a hopefully synergetic and fun mix.

Our hope with The Quest Hall is double in that it will likely increase the amount of load-sharing, communal effort and participation within our community whilst at the same time ensuring that WCH can operate with much less interruptions due to incessant questions and demands from people in need of tools etc.

Plenty of saw and metal dust, various types of construction materials. We will collect and sort all of our trash accordingly and return it either to Trash to Treasure or the local recycling station if applicable.

We are very interested in people willing to co-create and take shifts in our new project this year called The Quest Hall. Also always on the lookout for skilled craftspeople with a penchant for surfing waves of chaos while solving problems on the fly.

The Quest Hall is an attempt to add an optional gamified layer to The Borderland experience whilst simultaneously easing the coordination of real and fictional tasks and needs of theme camps, BL support structures (CP, WCH, Sanctuary etc) and dream projects.

This is done by applying principles and game design/dynamics inspired by role-playing games. By taking on quests (crowd-sourced from the community by the means of an online form or on-site through a computer terminal at the Quest Hall itself) participants will be offered the chance to take a direct part in helping all kinds of projects and dreams at Hedeland whilst at the same time amassing real life knowledge and experiences combined with fictional XP and loot (Pixie dollars?) for their Borderland avatar, gaining levels in one or more classes that can then be tied to a variety of perks and incentives woven into the fabric of the general BL experience. These stats and avatars will be saved from one year to the next enabling further future development/evolution if this experiment is deemed worthwhile.